Sunrise on Mont Blanc with Sandwich

August 12 – 13, 2009: On our way to the télépherique that would take us part way up Mont Blanc, my mountain guide Olivia and I bought poulet sandwiches and croix de savoy pastries to stuff in our packs. We weren’t sure where we’d be sleeping that night: the Gouter hut on Mont Blanc is notoriously over-crowded, and claimed we had no bunk reservations. “C’est impossible,” they kept telling Olivia; if we showed up anyway, we’d have to sleep on the scarred dining room tables in our down jackets, stealing a few hours of sleep between dinner at 8 and our “Alpine start” at 1 in the morning.

Leaving the tram station, we trudged upwards towards the hut; Olivia seemed unworried, but I was distracted by anxiety, my usual backbeat of self-doubt, fear, and depression. Even when the chamoix appeared in mother-baby pairs, waiting for our lunch scraps, I couldn’t appreciate the copper colored mountain goats with their curved unicorn horns. They lived on Mont Blanc – they belonged here. I was an American interloper, saggy in my unmatched pants and lilac waterproof jacket, slipping on the loose, dirty scree below the snow-fields. The European climbers looked like chic sports cars in their mountaineering gear, as they pushed past me muttering “vites, vites” under their breath.

I identified with him: he’d quit academia, indulged in self pity, and not only felt like a failure but could quantify his failings in detail. I found this familiar, since I’d quit Paxil and a tenure track job as an English professor at the same time. But Leslie Stephen was also an accomplished mountaineer, putting up multiple first ascents in the Alps and becoming President of England’s Alpine Club on the strength of his successes as a climber. The Alps were “sacred” to him because, as I was beginning to suspect, they alleviated his despair.

Leslie Stephen and I were on the same page. Put me on a glacier in crampons, give me 3,000 feet to climb, and feed me on Espresso Love “gu” packets – suddenly I’m singing “I feel pretty.” As one mountain guide I know says, “I’m depressed in the mountains, but I’m suicidal at sea-level.” The history of mountaineering is populated by melancholics.

My mood lifted as we climbed, and by the time Olivia and I were eating fromage omelettes at the Tête Rousse hut (lower than the Gouter hut, but with a bunk to sleep in!), the external world was real again.

Outside the hut, walls of ice crashed down from the ridge, shattering over the yellowed seracs below. Rock fall from the Grand Couloir was continuous: a hollow thock-thock-thock echoing from the canyon walls. Crow-like chouc-choucs perched on rocks, darting for crumbs spilled by the mountaineers lounging around on therma-rests. I wedged myself behind on an uncomfortably pointy rock, trying to look at the sunset on the mountain like it was a painting in a museum.

The next morning we got up at 1 am and started climbing at 2. It was oddly warm for the middle of the night, which freaked Olivia out, since we were about to climb “le Grand Couloir,” a 500 meter rock face infamous for its deadly fusillage of falling rocks. For much of the two hours it took to climb, Olivia kept me on a short rope for safety. Short-roping gets a bad rap: it’s not just about hauling an over-fed, under-trained client up Mt. Everest. It’s a respectable technique for climbing unsteady terrain in the dark: if I slipped on the ice or loose scree, Olivia would immediately arrest my fall. Fortunately, I didn’t fall – although we did have to run across one dangerous traverse, where the rocks tumble down like pinballs through a chute.

Once we got to the top of the Aiguille du Gouter, bypassing the mean-spirited Gouter hut, the sky had begun to change color, and I experienced my favorite element of mountaineering: sudden and inexplicable happiness.

Here we were, at 12,000 or so feet, tromping across a snow field by the Vallot hut, watching the sky lighten from black to blue and waiting for the first stripe of peach to light up the horizon and dye the snow rose. My hands were freezing and I had to clench them into fists to keep my fingers from going numb. But when the sun poked out from behind a peak, I started laughing out loud.

For the record, I am not a happy-go-lucky person, and neither was Leslie Stephen, who wrote of the necessity of making an early morning Alpine start: “I never profess to be in a good temper at six o’clock in the morning. Christian morality appears to me to become binding every morning at breakfast-time, that is, about 9:30 a.m.” Like his daughter Virginia Woolf, Leslie Stephen was prone to extreme and damaging mood swings, but I could tell, watching the sun rise from Mont Blanc, why Alpine mountaineering had been so important to him: it gave him joy. 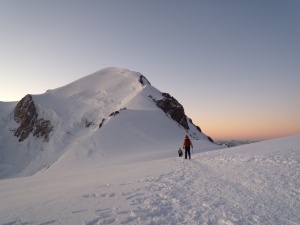 Climbing “les Bosses du Dromédaire,” the final long ridge up to the summit, I felt tired and almost tearful: here I was, climbing in Leslie Stephen’s footsteps, up the “Monarch of Mountains,” on a crystal blue August morning. But you can’t cry on a mountain: it increases dehydration, chances of frostbite, and simply isn’t cool in the stoic (and often masculine) world of mountaineering.  That’s why, when we got to the summit at 9 am, seven hours after starting, I decided to go for humor rather than heroism by posing for the  summit photo with my poulet sandwich rather than an ice axe. Leslie Stephen was known for his humbleness as a climber and never would have countenanced the weird heroic posturing of modern-day mountain “conquerors.”

Only as I grabbed the sandwich from my backpack, its cellophane wrapper blew off, tumbling across Mont Blanc’s glorious summit ridge and dancing in the fresh morning breeze. I attempted to lunge for it, but Olivia held me back (it’s her job to keep me on the mountain). This was completely mortifying, bad ecological juju, and everything else, but it turned into a Monty Python skit when a blonde German climber started chasing the wrapper across the ridge and down the slope, doing a full tackle on it, and holding it above his head once he’d retrieved it, perilously close to the edge. People applauded. I felt like an ugly American, but was deeply grateful for the international cooperation.

One of the truisms of any mountain climb is that the summit is only halfway home, and most accidents happen on the way downhill. Quads burn, toes get jammed, and exhausted climbers tend to slip more. And we’d be returning down the Grand Couloir in the heat of the day, when sun heating the ice amounts to major rockfall every few minutes. Sure enough, when we were almost at the bottom, near the traverse we’d run across that morning, a boulder came crashing down from the very top near the evil Gouter hut. Olivia is an amazing guide: one look up at the crazy, irregular path of the rock fall, bouncing twenty feet at a go, and Olivia had us both wedged in under a rock ledge in turtle position. Her reaction was instantaneous.

Sometime during that long walk down (all 9, 869 ft. of it), I remembered what Leslie Stephen had said about 19th century Cockney tourists on Mont Blanc: he’d made fun of them for being led out onto a glacier only so they could toss sandwich wrappers down the crevasse. Leslie Stephen, I realized, had been with me, making fun of me, on the summit that morning! Once I got over being the butt of his joke, I felt like my trip up Mont Blanc had accomplished what I wanted it too: I had communed with his spirit.